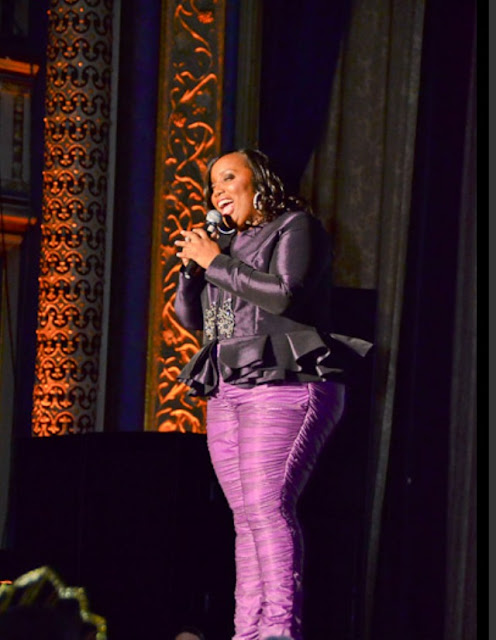 Melisa Brown CEO/Founder of The New York Fame
Page 21 Interview
The New York Fame Rocked Fashion Week with an amazing night of entertainment for a great cause, hosted by Recording Artist Keke Wyatt. Celebrity guests, fashion VIPs and industry insiders attended as designers from Project Runway as well as emerging designers debuted their fall 2012 lines while emerging musical artists performed.  Hosted at the Manhattan Center Grand Ballroom, the red carpet was graced with celebrities and featured designers. Renee Graziano, Erica Mena, Dwight Eubanks, Coco and Breezy were among those who attended the event. Recording artist Keke Wyatt was pretty in red and proudly showing her baby bump. (She said this is child number six)...she also mentioned during the show it was her first time hosting and ended the evening with a short tribute to Whitney Houston by singing “I Will Always Love You”. Shontelle performed her hit Impossible and also sang her favorite Whitney song “I Wanna Dance With Somebody” the crowd which was quiet most of the night, got up out of their seats. Fame Rocks Fashion Week 2012 benefiting Music Unites was an amazing event showing support for the arts of music and fashion. Featuring high-end fashion lines from Cotrice, Elena V Designs, Nikki Blaine, Nico Lena, Veronica Spadaro, Stevie Boi, and The Estradas. 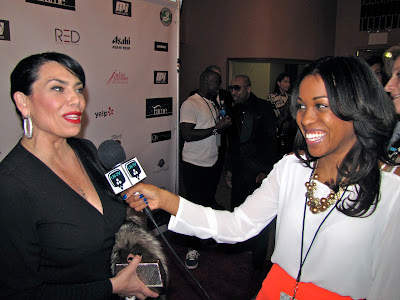 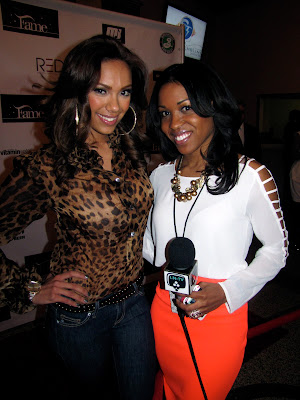 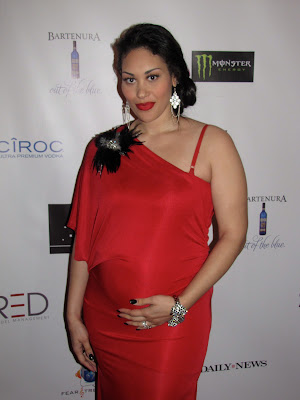 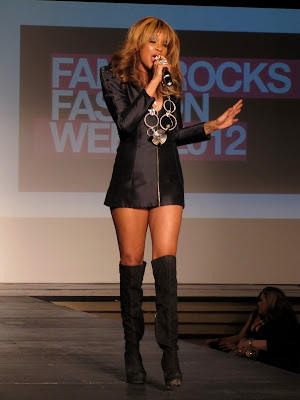 Posted by THE NEW YORK FAME FASHION WEEK at 10:16 AM No comments:

FAME ROCKS FASHION WEEK 2012 PRESS REVIEWS READ ALL ABOUT IT!

On behalf of the New York Fame, I thank you for your contributions to our February 15th, 2012 event, Fame Rocks Fashion Week 2012. With your donations, we had everything that we needed to make this event a dream come true for emerging artists and designers. 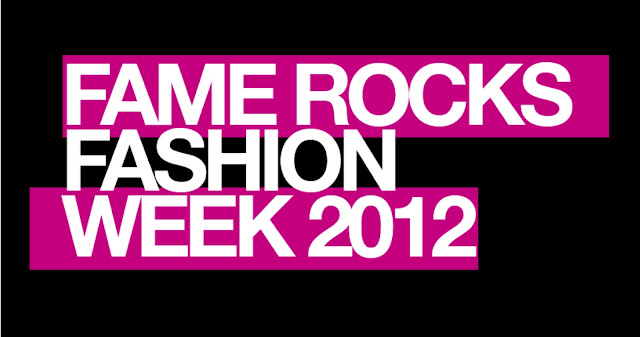 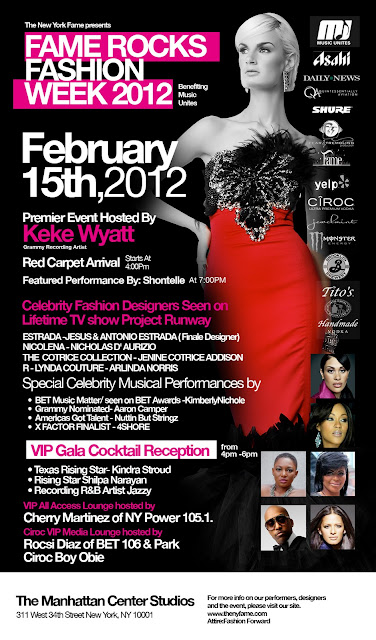 At this Stanford University commencement speech, Steve Jobs, CEO and co-founder of Apple and Pixar, urges us to pursue our dreams and see the opportunities in life's setbacks -- including death itself. As CEO of Apple, Steve Jobs spearheaded a few of the most iconic products in technology, entertainment and design. I am so impressed by this speech, and tell you how working for Steve Jobs for 5 years have changed my life and made me the women I am today.


I really appreciate Jobs cause this speech completely changed my life; In 2005 I was employed by Apple Computers as a creative. At that time I was a senior in College attending Lehman College in the Bronx. One would think that I applied for the job our Knew a great deal about Apple, but that was not the case. While studying Computer Graphic in College I was selected for a competition with my college to showcase my work. Long story short I came in second in this competition for my video reel presentation. My work got out and Apple found me and invited me on an interview, that interview was the being of my life in corporate America.
I got the job and worked for Apple for 5 years. While working at Apple I had the opportunity to meet some of the most influential & talented people in the fashion, art, music, film entertainment industry. Moved by there stories and experience in the industry, the idea to create my company “THE NEW YORK FAME” came to me, I pitched it to a few of my industry mentors like Maurice Dubois, Maria Snyder and Keith David, who encourage me to step out on faith and pursue my dream and passion to start my company. Today I am the CEO of the New York Fame and it as grown in it first 2 years as a successful production company.
Listening to Jobs speech reminds me of the passion I ha when starting my company, the challenges I face and why its worthy of pursuing our dreams and what we love.  We should not accept the fact that life is what it is. We have only tried to survive it not suffering too much. We should discover a simple fact that everything we called "life" was made up for people were no smart then we are. We can build it, we can change it, we can influence. "Your time is limited, so don't waste it living someone else's life. Don't be trapped by dogma — which is living with the results of other people's thinking. Don't let the noise of others' opinions drown out your own inner voice. Most important, have the courage to follow your heart and intuition. They somehow already know what you truly want to become. Everything else is secondary.
By Melisa Brown
Source:
http://www.ted.com/themes/best_of_the_web.html
http://www.ted.com/talks/steve_jobs_how_to_live_before_you_die.html
Posted by THE NEW YORK FAME FASHION WEEK at 9:21 AM No comments:

GET YOUR TICKETS NOW FOR THE LANDMARK EVENT THIS FASHION WEEK 2012
CLICK ON THE IMAGE NOW TO VISIT TICKET SITE. 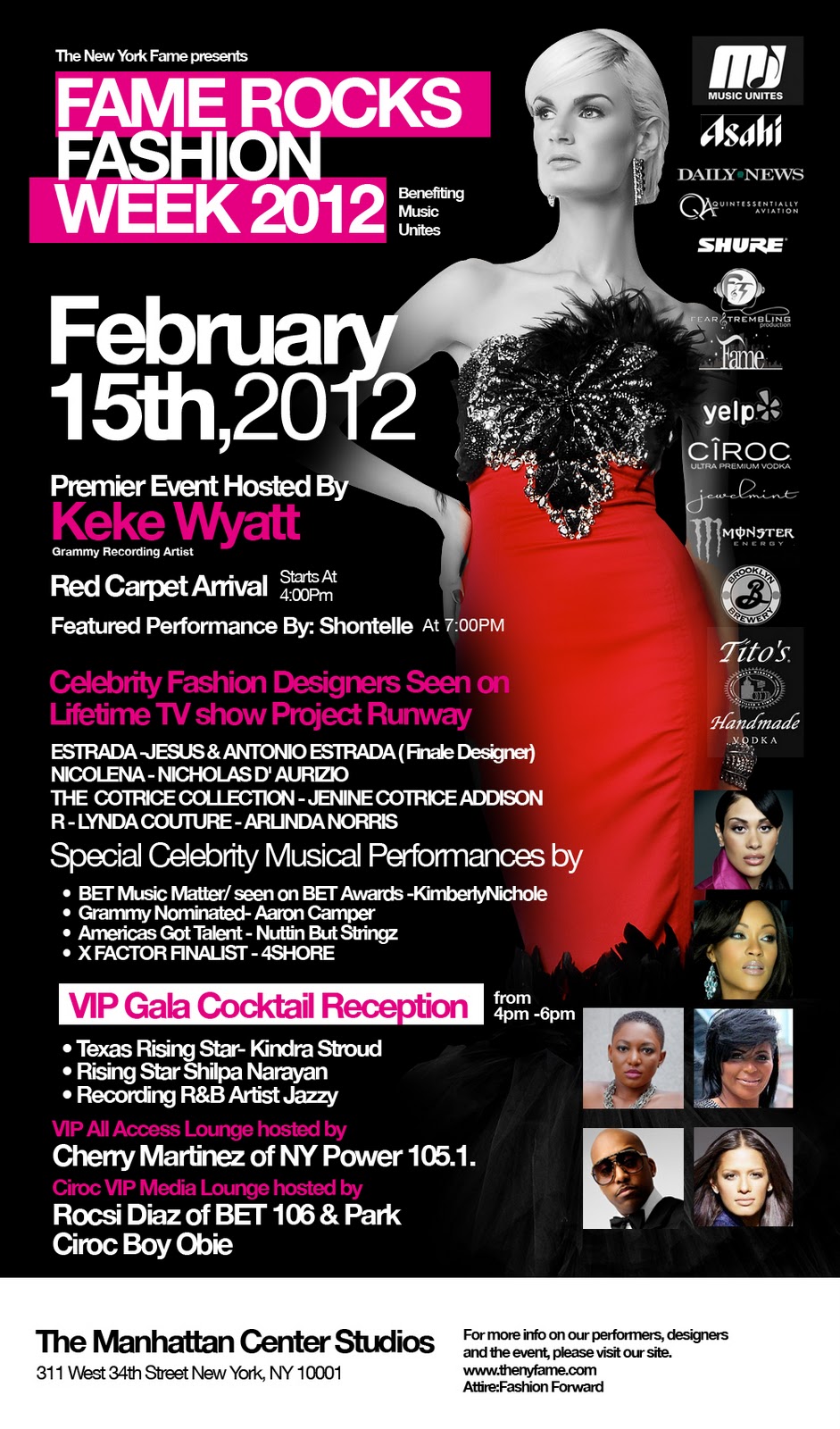 Posted by THE NEW YORK FAME FASHION WEEK at 12:45 PM No comments:

THE FASHION INDUSTRY ASSOCIATION
Would you like to be the person who decides which fashion apparel appears on the racks at retail stores? If so, you might enjoy a career in fashion industry. People in this field decide which products will be hot each season and how to market those items in the competitive world of retail. However design begins with creativity, professionals who work in fashion marketing and merchandising examine fashion trends, help retailers’ stock fashion lines, coordinate sales and promote goods. While you wouldn't actually design clothing as marketing and merchandising professional, you'd still be responsible for helping designers by ensuring that their lines sell. Successful professionals in the field usually have a blend of business skills and textiles knowledge, as well as the ability to identify consumer behavior and desires.
The Council of Fashion Designers of America Inc., is a not-for-profit trade association that leads industry-wide initiatives and whose membership consists of more than 400 of America’s foremost womenswear, menswear, jewelry, and accessory designers. In addition to hosting the annual CFDA Fashion Awards, which recognize the top creative talent in the industry, the organization offers programs, which support professional development and scholarships, including the CFDA/Vogue Fashion Fund, the Geoffrey Beene Design Scholar Award, the Liz Claiborne Scholarship Award, and the CFDA/Teen Vogue Scholarship. Member support is provided through the Business Services Network, a high-profile group of companies offering designers strategic opportunities.
The Fashion industry is based around crafting a positive consumer experience. Fashion buying can be a part of this. From choosing what to sell, to deciding how it's displayed in stores, fashion designers have a customer-focused approach. They know that presentation counts. A sweater by itself may not attract attention, but pair it with the right belt, jeans and some fabulous shoes, and it becomes a hot item. Fashion designers experts subtly inspire consumers to see the possibilities in their products.
“All designers deserve the right to design protection and only the creator of an original design should profit from that design. Taking someone’s work and calling it your own is wrong and robs the designer of a rightful return on their investment,” CFDA CEO Steven Kolb.
Fashion designers are not so subtle. It's their job to promote fashion. They want to generate interest in new styles and products. Fashion marketing involves advertising, but it's more than that. Fashion designers have to be on the cutting edge—endorsing the right thing at the right time. They connect the public with the world of fashion, and they help set trends. While many people think that they could make a career out of shopping, fashion designers is more complex than that. Fashion designers have to be aware of the nuances of trends. They have to anticipate where styles are going and what will catch on with consumers. Not every new style will make it to the marketplace. Fashion designers make decisions about what to sell and how much based on their knowledge of fashion history, market trends and customer psychology.
The CFDA continues to advance the status of fashion design as a branch of American art and culture; to raise its artistic and professional standards; to define a code of ethical practices of mutual benefit in public and trade relations; and, to promote appreciation of the fashion arts through leadership in quality and aesthetic discernment.
In addition to hosting the annual CFDA Fashion Awards, the organization is committed to nurturing the development of the American fashion industry’s future designers. The CFDA’s Educational Initiatives provide support and resources for students at the high school, collegiate and post-graduate levels. In addition, CFDA supports working designers in the early stages and throughout their careers. The CFDA, through the CFDA Foundation, Inc., mobilizes its membership to raise funds for important charitable causes: Fashion Targets Breast Cancer and The CFDA-Vogue Initiative for HIV and AIDS (7th on Sale).
Source:
http://www.cfda.com/
http://www.cfda.com/2011-cfda-fashion-awards-nominees-honorees-announced/
http://cfda.tumblr.com/
“CFDA CEO Steven Kolb”. Retrieved on February 4th 2012 from http://www.cfda.com/
Posted by THE NEW YORK FAME FASHION WEEK at 12:38 PM No comments: